September 11,2001, the blackest day to Americans. September 11 was the date of the terrorist attack carried out by a militant group Al- Qaeda hijacked four-passenger jet, two of those planes flew intentionally into the north and the south tower of the World Trade Center (WTC). Both towers collapsed with in two hours. Around 3000 people lost their lives and in honor of them were constructed the 9/11 memorial. The memorials are 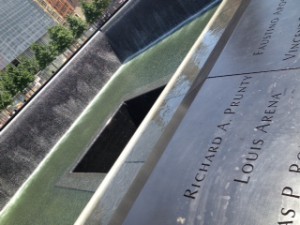 two reflecting pools build in the footprints of the towers, surrounded by a list of the victim’s names in an underground memorial space, designed by Michael Arad.

In this essay I’ll write in 4 different modes of architectural criticism which are the formal approach- In which you write about what you see. Experiential Approach- The author describes and expresses the way a building makes him/her feels.  Historical Approach – in which the author write all events historic relative with the building or structure and Activist Approach in which the author fight if a building should be preserve, modify or replace. 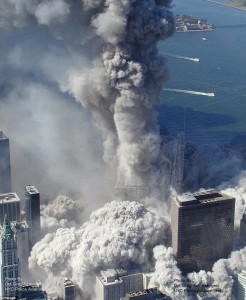 On, as is often noted, a warm, sunny summer Tuesday morning in the city that never sleep skyline became the front of the war.
At 8:46 a.m. American Airlines flight 11, flew into the north tower of the World Trade Center (WTC) at 9:12 a.m., United Airlines flight 175 hit the south tower and at 9:59 a.m. crumbled and fell to the ground after 56 minutes in a fire, followed by the north tower at 10:28 a.m. after burning for 102 minutes. When the north tower collapsed, debris fell on the nearby 7WTC building, damaging it and starting fires.

In WTC 2, the core was damaged severely at the southeast corner and was restrained by 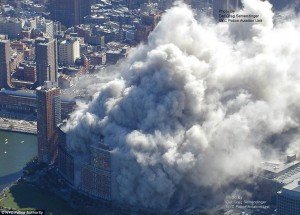 To honor the memory of all the victims of September 11,2001 and February 26, 1993 the was performed a global competition to build a memorial and in 2004 Michael Arad won the design competition. By 2006 the cost of the memorial and related projects had nearly triples to close a billion dollars. In 2011 the tenth anniversary of the September 11th attacks; the site where the Twin Towers used to stand became New York City’s newest landmark with the official opening of the National Memorial.

To visit the memorial pools you will need your camera and money to go to 90-west St. 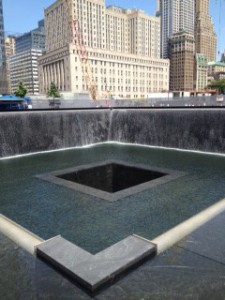 Once you are at 9/11 memorial center, next to you, you will see a little cemetery, walk straight to Church St. then make a right to Liberty St. keep walking, don’t you see the freedom tower in front of you? Right in   the front it’s the Freedom tower, the two pools and the museum. The memorial are two square waterfalls, build in the footprints of the original WTC, it includes a plaza with more than 400 swamp white oak trees.

“The memorial occupies about half of the 16-acre World Trade Center site, which is a busy place these days, with four towers in various stages of construction. It includes a plaza with more than 400 swamp white oak trees, an area that will serve as a green roof over an underground museum designed by Aedas Architects with an entrance pavilion designed by the Norwegian firm Snohetta” (Article, Architect and 9/11 Memorial Both Evolved Over the Years)

Take a look the details on the pools, every name inscribed on the bronze parapets that are being installed along the perimeters of the pools where the World Trade Center towers once stood.

“It was important to not put the names in an arrangement that looked like the pages of a ledger,” Mr. Arad said. “To the naked eye, it looks random. But to those who know, and for those who bother to learn, it is anything but.” (Constructing a Story, With 2,982 Names)

We all know what happened that terrible day and we all feels that curiosity of visit the place where thousand of new Yorkers lost their lives.

I went to 9/11 National memorial two times and I have to say that the feelings that this place transmits are not compare. It’s unique. Once you are in Ground Zero, you will noticed the city in action, the loudly traffic, people running to get their work, others running to their lunch time, the hustle in the street, but everything change at the moment you enter to the memorial.

Instantly you feel this inner peace, calmness, and sadness. The hustle you used to hear 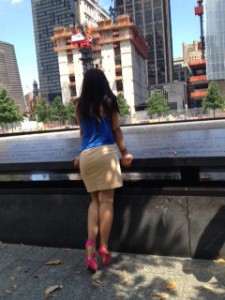 automatically disappear, it’s like the memorial were in its own world, but no Manhattan. The sound of the cascading waterfalls creating an ideal place to pause and meditate and replete of trees making feels like you belong this spot, blocking out the noisy of the city, remember life with living form and serve as living representation of the destruction and renewal.

“It really enriches the memorial,” he said. “It allows families’ and friends’ stories to be told.” He said the “river” of names, without other identification (like age or title or company affiliation), was meant to convey simultaneously a sense of individual and collective loss.” (Constructing a Story, With 2,982 Names)

The 9/11 National Memorial a masterpiece to the history of New York.  This structure should be preserve would be irrational and incoherent to think no preserve it.

“Andrew Wender, Sgt. Al Moscola, and Capt. Joseph Baccelliere. The court officers were in the locker room on the morning of September 11 and ran to the towers to help out. In the final minutes of the crisis, they would see firefighters sitting on the 19thfloor of the north tower, apparently unaware that the other building had fallen”  (102 Minutes. The Untold Story Of The Fight To Survive Inside The Twin Towers)

“He saw a man standing in a window frame on a high floor in the north tower. Around him were five or six other faces, crowded into the same narrow window frame”(102 Minutes p.137)