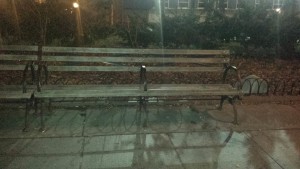 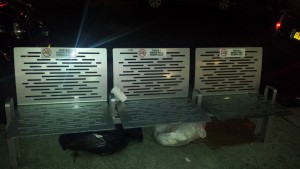 My photo is of two benches. On the right is of a wooden bench and the left is of a metal bench.  In “Anti-homeless spikes” Alex Andreou wrote about the comfort he took on a wooden bench when he found himself homeless after a series of unfortunate events that took place in his life . He went on to described why it was as he put it “prime property.” Because the wooden bench was used so much, it had a smooth surface. Since it was positioned in front of a wall which was behind a generator, heat would radiate from it. Also the wooden bench was located under a tree which provided shelter. All of those things he took comfort in were gone, and before he knew it the wooden bench was swapped out for a curved shaped metal bench, Andreou said, “I felt such loss that day.” My photo captures the differences in the benches. The wooden bench was located near the court building on Court Street in front of New York City Subway station. The metal bench was located on Montague Street between Clinton St and Court St. Also the metal benches display a sign with a No Smoking symbol, and a message stating “This is a smoke free workplace.” The differences are obvious; the wooden bench provides more space, whereas the metal bench only allows space wide enough only to sit not to lie down. The metal bench actually looks more like small separate chairs which were put together than a traditional bench. The overall size compared to the wooden one is smaller, and there are holes through the entire metal bench. While looking for a picture that would relate to this reading, I also came across a Bank with a sign also located on Montague St. that  said no loitering, panhandling, or sleeping, along with a list of other rules. It had a disclaimer basically saying if anyone did not comply with the rules it will result in getting arrested and prosecuted.

“The end of capitalism has begun” By Paul Mason

In “The end of capitalism has begun” what stood out for me when Mason was trying to figure out how a economy,which is based off scarcity, would function if it was instead based off abundance. He goes on to use economist Karl Marx’s “The Fragment on Machines” to explain it in which he says, “The productive power of such machines as the automated cotton-spinning machine, the telegraph and the steam locomotive did not depend on the amount of labour it took to produce them but on the state of social knowledge. Organisation and knowledge, in other words, made a bigger contribution to productive power than the work of making and running the machines.” In my opinion this really applies to the post capitalist economy that mason says we are transitioning into in the sense, it is with our access to some much more information than ever before still has the potential of making society it a better place not because of the technology it self, but how we use it to improve how the society works.

Capitalism was able to thrive the because the private corporations had the knowledge to use the industrial revolution to their advantage. Now we see a shift in today’s world, businesses can be created without the influence of the private corporations who held the strings on how to conduct business for so long. The new way of doing things doesn’t exclude anymore and that is something that cant be controlled like Mason said. I also agree with mason that a capitalist economy will no longer exist because of the shift in new values and new behaviors. The 2008 financial crisis is a great example of that view because people who would be considered the upper middle in a economy began to  feel the pressure, and that crisis had lasting effects on them and everyone else below, and as a result people are going to do things different because they thought it could not happen to them, changing from a capitalist to post capitalist economy.

My discussion question is based off both the Andreou and  Mason readings. How would a post capitalism world affect the lives of the homeless? Mason spoke about the components that make up a post capitalist economy,  would it harm or benefit a homeless person?