Posted on November 5, 2015 by Christopher Navarrete

Ricardo Dominguez in “Electronic Disturbance: An Interview” discusses the journey of how he became interested in committing acts of electronic civil disobedience. This began shortly after coming to New York City, where everything he had was stolen from him within twenty minutes. Dominguez was inspired by this illegal act as he felt that New York was telling him becoming a thief was the only way to survive. He would then steal a number of expensive Verso books and learn how to code from them in a place named The Thing. A couple of years later, Dominguez would learn about the Zapatistas and join a team that committed civil disobedience to help them, such as hunger strikes over the Mexican Consulate. Later, he would combine his knowledge and experience of coding and civil disobedience to further help the Zapatistas. Such as overloading websites, virtual sit-ins, helping E-Toy, and several others.

I thought this piece was very interesting as it tied in with several things we talked about in the past. I also liked how it was a long journey that discussed several tactics used in electronic civil disobedience. Before reading this piece, I didn’t know what that meant, however I now know it is defined as a way for protesters to carry out their actions via the internet or online technologies. One part from this piece by Dominguez that interested me was the last couple of paragraphs in where a child named Pedrito called a stick Mayan technology. He would tell the Zapatistas that they have no imagination and as a result, it opened their eyes as they realized it was something they are missing.

“The Task Force is clear that the legitimacy of the badge is aimed at getting people ‘to obey the law.’”

According to Jose Carmona, the Task Force was created to not help reduce police violence, but to “strengthen police, expand their budgets and insulate them from public criticism.” They also wish to create some kind of trust and legitimacy, however Carmona questions it’s importance in how it creates justice. As the quote states, the Task Force believe they are creating this justice by just having a badge to show around. It will somehow make them legitimate in the eyes of civilians and make them obey the law. This is something that is common today as police officers believe that having a badge gives them “the license to kill.”

Mark Dery in his article discusses how culture jamming has affected billboards that advertised cigarettes and alcohol. One example that interested me was how Reverend Michael Pfleger, a priest and social activist in Chicago, assembled a team in 1990 to “reface” about 1000 billboards advertising tobacco and alcohol use. They did this because they realized that “the number-one killer [wasn’t] crack or heroin, but tobacco.” As a result of their “billboard banditry,” these ads were starting to disappear a year later according to Bruce Horovitz from the LA Times. 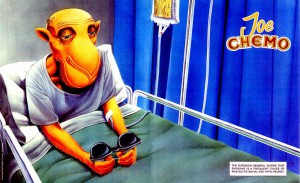 An example of how one of those tobacco advertisements may have been altered is seen in Camel cigarettes mascot Joe Camel. According to Dery, an undercover group turned Joe’s “phallic nose into a flaccid penis and his sagging lips into bobbing testicles.” Other examples of how individuals committed “billboard banditry” to Joe  include “Joe Chemo,” a version of Joe that is depressed because he has cancer as a result of tobacco use. Another Joe Chemo ad simply shows the mascot dead in a coffin. Lastly, there is also one that depicts Joe in a hospital bed connected to a number of tubes close to death. 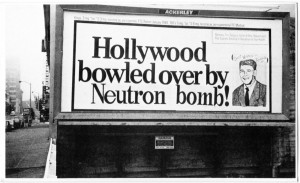 of how billboards have been altered is seen in a Kent Cigarettes ad. According to Dary, a group formed in Seattle known as SSS changed Kent’s billboard original message to one that was inspired by the news of America producing neutron bombs. Instead of “Hollywood Bowled over by Kent III Taste!,” it read ‘Hollywood Bowled over by Neutron bomb!” They had also replaced the picture of a cigarette pack with a portrait of Ronald Reagan, the president at the time. According to several newspapers, Kent Cigarettes was a well known company at the time, so the message may have been passed along successfully.