Electracy and the “image”

This project was extremely difficult for me. I think the hardest part of this project was finding a subject to delve heavily into. My process thinking through this project was to find something that mattered to me and that it was relevant.
My classmates were incredibly amazing. Seeing their projects completely inspired me immensely. I would love to give them all an A, I think Pamela really knocked it out of the ball park it. I think the subject might have been something that she dealt with as a child or maybe even in adulthood. It was important for her to use this project as a medium. My peers gave wonderful suggestions that really helped me with narrating my thoughts. I was planning on clearing up what the “false representation of self” was, which I hoped I achieved in explaining. I made many changes, I really tried to make the project easily understood. They suggested I explain more about Ulmer’s term and draw connection to it. Also Mariah, suggested that I explain more about the photos.
I think for a project being given for the first time, all my classmates tried their best. The project was heavily detailed and required a thoughtful approach to completing it. If you ever give this project again it you should explained and given 3 week completion date. I hope through these projects we are able to shine a light on issues that are relevant today and hopeful we can take another approach to solving problems.

Throughout time, there has been a shift from orality (speaking) to literacy (writing) to the current state of electracy (digital communication). This new era of digital communication has significantly changed the way society views communication through different mediums such as the Internet. Digital media/communications is any digitized content (text, graphics, audio and video) that can be transmitted over the Internet or computer networks. These digital mediums have created new social media platforms such a Facebook, Twitter, Instagram, Snapchat, Vine, Youtube, OkCupid just to name a few. With these new channels of communication it has unconsciously created a certain type of online “image” that one tries to uphold. This online image of oneself is sometimes a fabrication of who a person is. This image is a false representation of who a person is and sometimes it is used as deception, which can be unethical.

In the current state of over-sharing, constant spreading of information through technologies such as smart-phones, laptops etc. information is easily made available online. We are constantly sharing information online whether it is photos, videos or just a chance to tweet something. Today, society expects for you to have a certain type of image/persona online. An online profile creates a false image, which is being portrayed online and takes away from how a person is in real life. Some people create an online “image” and act it is sometimes a fabrication of who a person is. In 2012 MTV premiered “Catfish: The TV Show,” is an American reality-based docu-series television series about the truths and lies of online dating. A catfish is a person who creates fake personal profiles on social media sites using someone else’s picture and false information to pretend to be someone other than them. This false depiction of them is unethical because it is a way to trick someone into falling into love with them. The lines for honesty on the Internet are sometimes blurred and people are not honest when describing themselves.

In orality (speaking) there is no image because there is only speaking in the community. In literacy, there is a mental development of the image, which is able to reflect upon it’s self because of literacy. Then in electracy, an individual is able to create an image of one that can be portrayed online. This sense of self that is portrayed through the image is a false representation of self. This imaginary image of oneself is created through electracy. The idea of an image online fails ethically because morally you should be honest about who you are online. Also, when you look at an image it can be misconstrued whether it is intentional or by accident.

One aspect of the image being created online is through online dating. Online dating creates an image; this “image” then takes on a life of its own on the Internet which is false. It is a false because it is a misrepresentation of who a person is. The image, the profile photo, the profile description creates the “perfect persona” to lure in a prospective candidate.  On OkCupid for example men and women tend to create these elaborate online profile for prospective lovers.

Where do I start? First let’s talk about how sexual the profile name is. The name, which refers to a sexual position and “secret fun”, along with the profile photo would give the illusion that this person is cheating on his significant other. 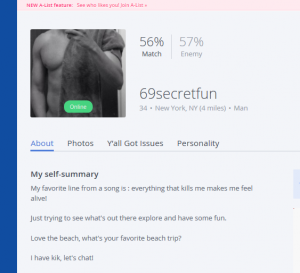 Here is an example of a “Perfect image”

This is supposed to be a “doctor” When someone see this photo immediately they think what a perfect guy. The photo seems to staged. It also begs the questions did he have to take a photo in the white coat with the stethoscope. 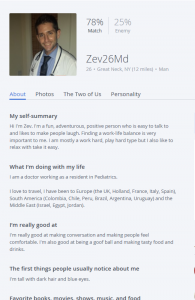 I tried to create a profile with a “sexy” image to show how easy it is to create a false sense of self. This sexy photo gained me 148 visitors per week and over 75 provocative messages. Immediately upon looking at the image, you are resorted to think “Wow, look at that model, she’s perfect!” When honestly it may just be good lighting and a carefully worded profile to seem like the ideal candidate. Truth be told there is no “ideal” profile photo because it can all be misinterpreted. 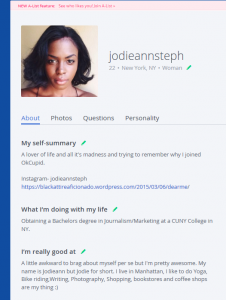 Gregory Ulmer created the term “electracy” and in his Apparatus table there are three elements that goes hand in hand with the types of electracy observed in online profiles creation of the “image”.  According to Ulmer’s chart in electracy the terms entertainment, body and joy/sadness are important when discussing our transition into electracy. In the chart practice is entertainment, behavior is play and the axis is joy/sadness. In the transitioning from orality was religion, literacy was science, electracy is entertainment.  The focus on entertainment in electracy is this state of over amusement and enjoyment that one has online. Online profiles are pure entertainment because of the types of images people use for instance —-people surrounded with money, purposely posed in front of a expensive car or yacht or around a lot of sneakers. Some people tend to show their body and exemplify it as part of their image. Often times both men and women may resort to Photoshop as a way to create that perfect image. This constant use of the image creates a joy/sadness, which ultimately an unethical use of electracy. 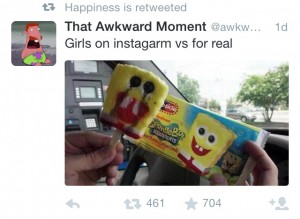 PSA: When talking to anyone online just be careful and good luck 🙂

4 Responses to Electracy and the “image”