Electracy has shaped many aspects of our lives as we know it thus far, from the way we write to the way we learn. Electracy has moved us past literacy but still helps us to bridge the two concepts together. With that let’s address the aspect of how electracy has placed a great impact on social injustice and the outcomes that come as of this new age way of protest.

Many take to YouTube, Tumblr, Facebook, Twitter, Instagram and other social media sites to post opinions, repost art that is affiliated with the cause, create hashtags, submit comments, actively retweet, or share links of  those who either go against the fight by proclaiming their idiocy in their videocy, or proclaim strong want for change in the situation. Either way these new methods of social protesting for social injustices get the word out FAST and it spreads like a forest fire on the World Wide Web. Hashtags leave traces for anyone who is left out of the loop to jump on a bandwagon as quick as possible and videos are shared and uploaded due to quality or concern for ethical standards but due to the fact that their opinions whether good or bad must be shared, seen, and creates some motion in the ocean. 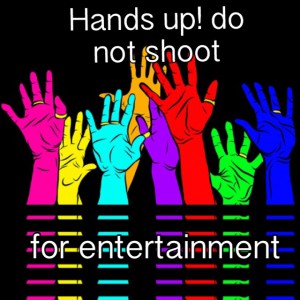 Recently, there has been a lot of social injustices as it would seem in the African American Community which has caused a lot of turmoil not only in the real world but in the virtual world as well. Audiences either for or against the protest of the exploitation of young African American men being targeted in police brutality have taken to the social media highway to make their opinions known. This new medium has been the platform for activists and even attention seekers to have events and opinions not only heard but immortalized.

Images such as this have been created, shared, hashtagged and retweeted to get the word out about this injustice. Even though this is clearly not the first social injustice to occur it is one of the fastest spreading and attention generation movements in the USA of today due to the option of uploading a video, picture, or comment. Electrate technology has allowed social injustices to become viral. Anyone with a mobile device can readily engage in a topic. This topic however must be able to stimulate some type of attraction display and attention generating content. After engaging a few people whether based on positivity or negativity display the participatory pedagogy comes into play. This is when people take to forums to respond to an outrageous video made by someone painting themselves in black face or someone addressing that race should still not be a measure of a man or his ability to success in life. After this point in the game there is no turning back. There is no cap on the spreadibility factor and before you know it a friend is asking you, “have you seen that video…” this is the point of distributive subjectivity. By this point there have been memes generated, so many retweets, or coined catch phrases that we can no longer remember how we existed before this video. This phenomenon occurs due to tubing. The linking of one apparatus of electrate reasoning to another simulates the viral aspect of the internet.

In this same aspect the generation of video and image content based on social injustices also create other electrate apparatuses. Take for instance the apparatus of axis and how in the electrate era is it known as joy and sadness where as in the literacy era is was true/false. This is due to the fact that in this time feelings are more so accepted and in a way that impeaches the ethics of electracy due to the fact that everyone believes their voices should be heard and broadcasted no matter content. There is also the apparatus of play at work here with the very concept that in every vine or Snapchat created whether good or bad produces some form of creativity.

Lastly is the apparatus of entertainment. In social injustices there is very little room for laughter or drama yet in much of the content produced by muse of social injustices have somehow been made into comical satires, talk show punch lines, or parody songs. Sadly, however troubling or ethically incorrect this may all seem these apparatuses add to a cause, they add fuel the fire that generates protest for both sides, generates talks political or social, creates platforms that tube more and more content and media creativity and productivity together. Electracy in a way cannot be made ethical because in this age the right and wrong ways are less accepted. It is how one feels that is pushed into viral madness. It is the creativity and the ability to generate a video or image that will intentionally generate attention, participation, distribution, play, evoke an emotion and spread that encompasses the true meaning of electracy. It boils down to this it is either you like it or you don’t.